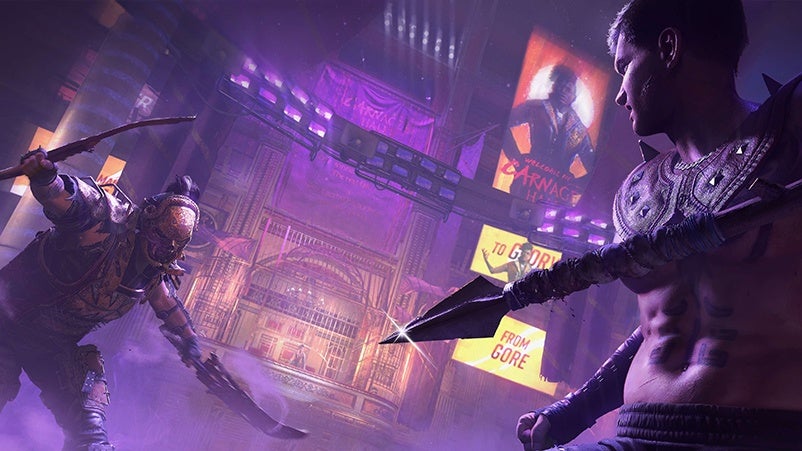 
The circus is an odd place, thrilling for some and utterly terrifying for others. Flame eaters expel their scorching breath a bit too close to the tent canvas. Clowns are just creepy. When the ringmaster invites you to the center ring, there’s a nagging fear you may be the real attraction, and at the end of the day, you wonder whether it was really such a fun experience after all.


It’s much the same in the Dying Light 2 Bloody Ties DLC. The zombies spew fire a bit too close to you. When the ringmaster invites you to the center ring, it’s because he wants to extract your intestines as painfully as possible. And the clown is you, for actually showing up.


After the lights died down and the excitement evaporated, I was left wondering how much I actually enjoyed Bloody Ties, for all its spectacle.


Bloody Ties starts with a rumor about Old Villedor’s underground fight club, and like any good protagonist, Aiden heads off to investigate. A few baseball-bat slugging matches and unexpected murders later, and he winds up in Carnage Hall on the hit list of a strange new villain: Skullface.


Carnage Hall is where glory-hungry fighters and unhinged people who just like violence gather to do battle. Renegades, Peacekeepers, and your average Survivor mingle without thought to allegiance, a convenient setup that helps separate this DLC from the main story entirely. Your actions don’t matter here, and there are no branching story routes.


While this is an ideal setup for exploring the people of Villedor and their daily lives and relationships from a unique perspective, Bloody Ties centers only on the mystery surrounding Carnage Hall and Skullface’s dedication to murdering people; which singles him out as having an unusual love of death even by Dying Light standards.


The result is an odd mix. Having a focused story after the base game’s sprawling narrative filled with distractions is refreshing, but it also feels stretched, like a side quest that goes on for too long. Plot developments happen a bit too infrequently, and with no substantial side quests or even insights into the characters around you, it relies almost entirely on the action to keep you invested.


That said, the final revelation was unexpectedly satisfying, a shocking and gruesome angle on the usual survivor story. These expansions are the ideal chance to slow down and let the people and places of Villedor who have no ties to Waltz and his complicated missile plot finally tell their stories. Bloody Ties misses that opportunity somewhat, but it does prepare a foundation for future expansions to build on at least.


The action in between plot moments is a bit of a curious collection as well. Most of what you’re doing in Bloody Ties is what you already did in the main game, only without the freedom of exploration in New Villedor – races, time trials, and the like. Tedious as that sounds, Techland made these some of the most interesting and tense obstacle courses in the series so far. Night-time chases start at max rank. Checkpoint challenges send you around a small, enclosed area where smart use of your grappling hook and glider are key to success, and battles take place in bizarre arenas full of deadly hazards.


Bloody Ties is lacking in the puzzle department, though, and it even knows this. During one drawn-out quest around Carnage Hall’s surrounding area, Aiden ventures into an abandoned electric station. Instead of an actual wire puzzle awaiting him, though, there’s just a piece of paper pinned to a concrete pillar.


Despite a fancy new weapon at your disposal, combat, and even weapon customization, felt disappointingly similar to the main game. That’s partly down to the original’s extensive customization and weapon range, though. When you can already smack someone into the stands with a baseball bat, freeze them with a jury-rigged axe, and then shoot flames out of a makeshift polearm, it’s hard to top that, at least so soon after the main campaign’s launch.


Bloody Ties is a fun DLC, especially if you enjoyed the side activities in the main game, but it’s hard not to think Dying Light 2’s first expansion could have benefited from a bit more time – even after the delays – to help it live up to its full potential. The Callisto Protocol: Where To Find All Weapons

Steam Deck hits over 7,000 games either Verified or Playable