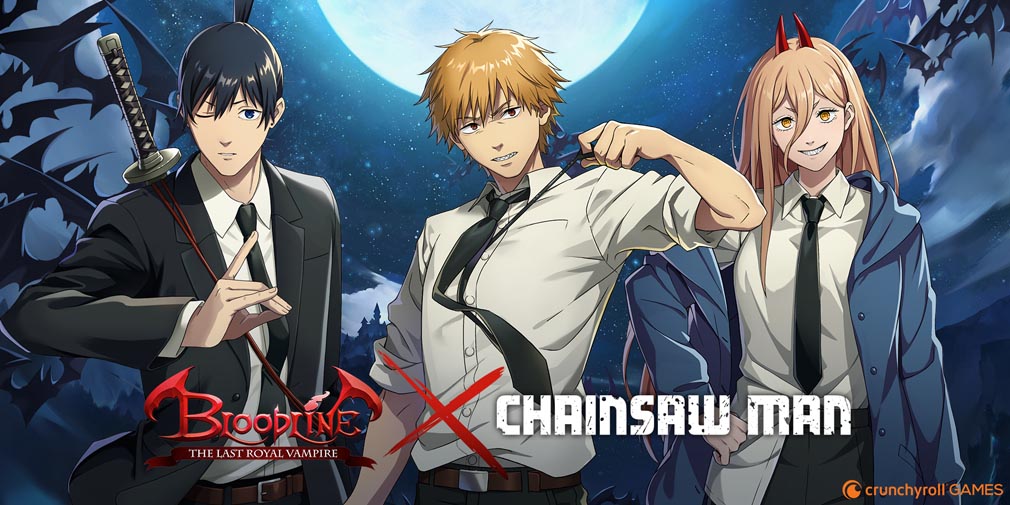 Crunchyroll Games has announced an exciting crossover for Bloodline: The Last Royal Vampire, letting players of the mobile JRPG experience a special collab with the popular dark fantasy anime, Chainsaw Man. During the collaboration event, players can look forward to obtaining characters such as Denji, Power and Aki reimagined into adorable pixel forms.

In the latest crossover for Bloodline: The Last Royal Vampire that will run until early January, players can expect to add fan-fave characters from the series into their collection, as well as score a special outfit for Denji from Chainsaw Man. They can also express themselves and flaunt their love for the series by updating their public profile image with exclusive cosmetics, along with some fun character images, frames, profile portraits and more.

The limited-time collaboration event is also giving away bountiful in-game goodies for players who simply log into the game during the event period. These rewards include in-game currency that will help fast-track players’ goals to grab those collab characters in a jiffy.

If you’re keen on giving the collab goodies a go for yourself, you can download Bloodline: The Last Royal Vampire on the iOS App Store and on the Google Play Store for Android devices. It’s a free-to-play game with in-app purchases. You can also join the community of followers on Twitter to stay updated on all the latest developments, visit the official website for more info on the game, or take a little sneak peek at the embedded clip above to get a feel of the latest collab event in store for you.

Are you on the hunt for more similar titles that will put your skills to the test on your mobile device? Why not take a gander at our list of the best JRPGs to play on Android? Everything we know about Dead Island 2: Release...