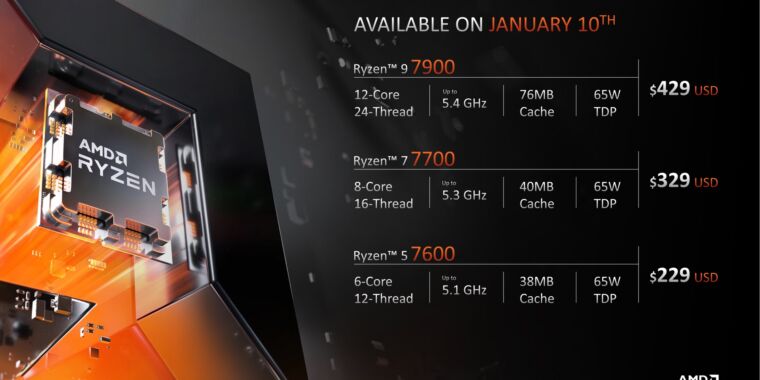 AMD is officially lowering the barrier to entry for the Ryzen 7000 series today, announcing a handful of new models aimed at more price-conscious buyers. For people on the money-is-no-object end of the spectrum, the company is also introducing new 3D V-Cache-enabled processors with extra L3 cache that will benefit games and other cache-sensitive workloads.

As we found in our initial reviews of the Ryzen 7000 series, setting the chips to a 65 W TDP usually reduces their performance, but not by as much as you’d think—all three chips should run cooler than the X-series CPUs while still being comfortably faster than older Ryzen 5000-series CPUs, and the 7600 shouldn’t need more than 65 W to provide peak performance. If you want to run the CPUs faster, setting higher TDP values and overclocking is still possible on all these processors.

The three CPUs will be available to buy on January 10. They’ll compete with Intel’s newly announced 13th-generation desktop CPUs. At the high end, Intel tends to outperform AMD for the same price, and cheaper motherboards and DDR4 support bring down the cost of buying into Intel’s platform for budget PC buyers. These new Ryzen CPUs should improve AMD’s competitiveness, but until motherboard and memory prices come down a bit more, they won’t be able to change that dynamic by themselves.

The three 3D V-Cache processors are also variants on existing chips. In this case, the 7800X, 7900X, and 7950X. The 7800X3D, 7900X3D, and 7950X3D all maintain the boost clock speeds and core counts of the regular X-series chips (the 7800X3D has eight cores, like the 7700X) but with an extra 64MB of L3 cache stacked on top. The system sees and accesses this cache the same way the L3 does that comes built into the rest of the CPU, and in our review of the Ryzen 7 5800X3D, we found that it’s generally beneficial for game performance in particular.

The 5800X3D was launched fairly late in the Ryzen 5000 series’ lifespan and came with reduced clock speeds and restrictions on overclocking and changing power settings that the regular 5800X didn’t have. AMD also didn’t launch any other 3D V-Cache chips with higher core counts, meaning people who wanted great game performance and 12 or 16 CPU cores had to choose one or the other.

AMD solved most of these issues for the 7000-series 3D V-Cache CPUs, though there are still some oddities: each CPU’s base clock speed is still lower than its X-series counterpart, and all three CPUs have a 120 W default TDP, which will likely limit the performance of the 12- and 16-core CPUs in heavily multithreaded tasks unless you can lift those power limits (the default TDP for the 7900X and 7950X is 170 W). And overclocking is still somewhat limited—the new X3D chips support memory and Infinity Fabric overclocking, plus fine-tuning via AMD’s Precision Boost Overdrive and Curve Optimizer features. But they won’t be fully unlocked for traditional overclocking as the other CPUs are.

AMD hasn’t divulged pricing for the 3D V-Cache chips yet, though if the 5800X3D is any indication, prices will be substantially higher than the non-3D V-Cache versions. They’ll be available to buy in February.

All six of these new processors will fit in existing socket AM5 motherboards after a BIOS update—one of the new features of the Zen 4 architecture is built-in support for updating your BIOS without a CPU installed. If you buy one of these the day it comes out, you generally won’t need to worry that the new motherboard you bought with it won’t support it out of the box. 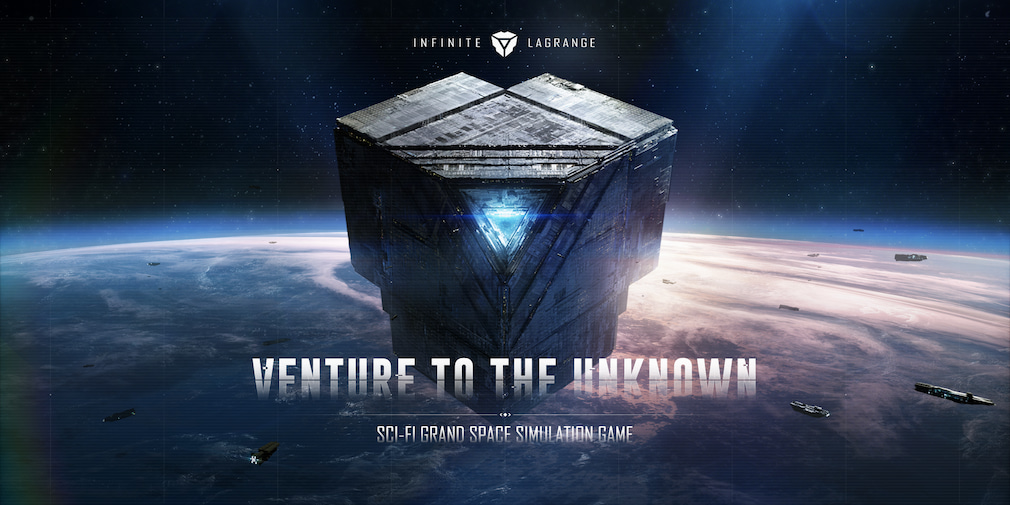 Sonos speakers are 20 percent off through Cyber Monday

The Dead Space Remake May Be the Best...

I wish my Spotify Wrapped had this Apple...